The Division lets you equip two normal sized guns and a sidearm (Weapons) along with body armor, mask, knee pads, backpack, gloves, and holster (Gear). Firearms, Stamina, and Electronics are Stats you get by leveling up and from equipped Gear which gives bonuses. Firearms increases the damage of your weapons, Stamina adds extra health, and Electronics gives you more skill power. This is all found in the Inventory menu under Overview. Guns can also be given additional bonuses with Mods which are dropped as loot.

Speaking of loot, it’s the items dropped after killing hostile enemies in the world and found in chests, drawers, and other containers. Dropped loot is represented in game by a glowing pillar coming out of the ground. The color of the light pillar depends on the rarity of the item. The least rare items are white and from there it jumps up to blue and purple much like in MMOs.

Walking over the light lets you view each item or pickup all of them. Loot is unique to each player in game so you only see loot on screen that is yours, everyone else loot is hidden. Basically, pick up all the loot you can because it’s all yours and you can carry quite a bit before your backpack fills up. Remember, even if you don’t want the stuff you can sell it to a Vendor later for Credits to buy items you do want. 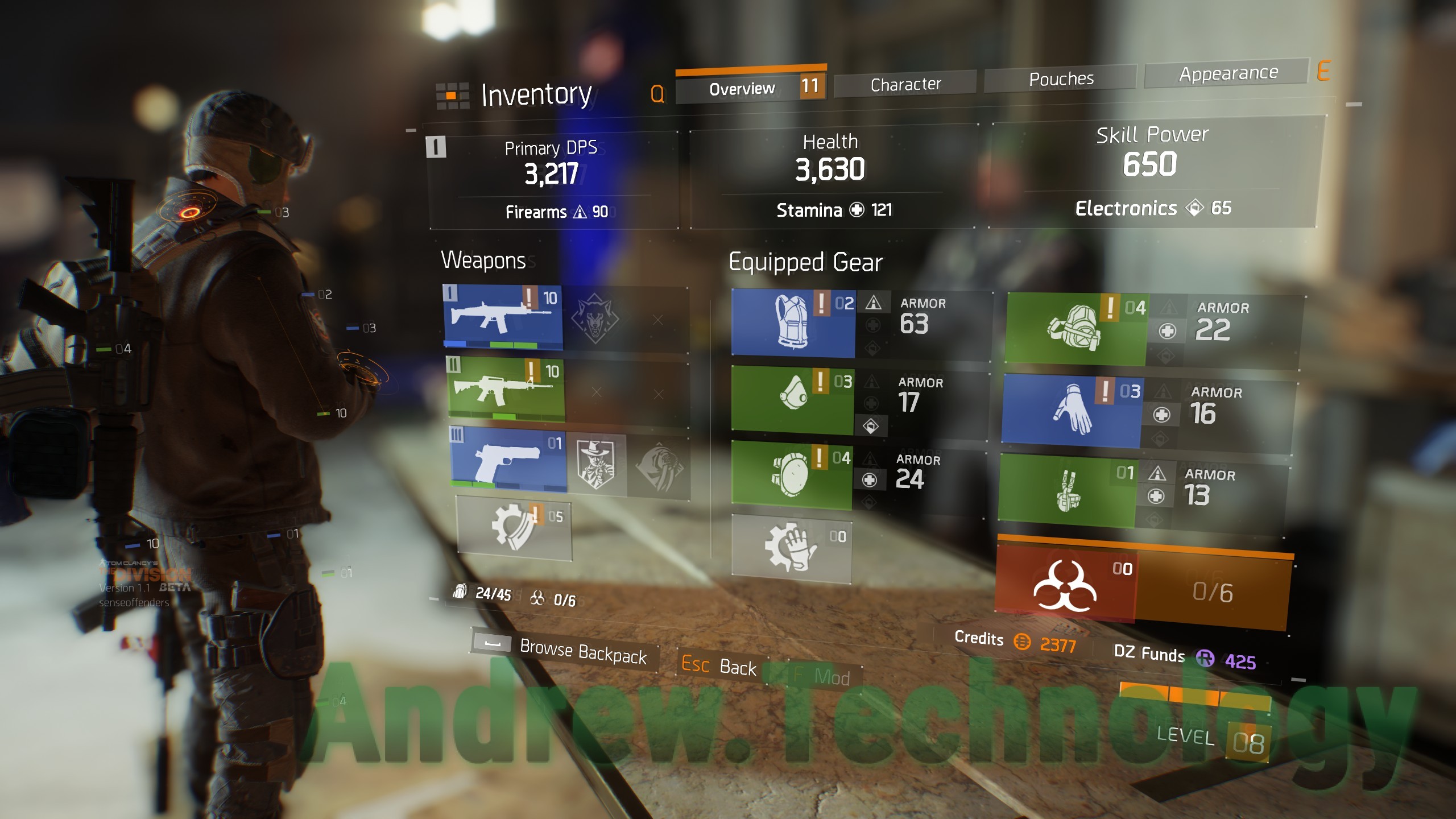 The Divison Overview Inventory Menu with Equipment Guns and Gears Firearms, Stamina, and Electronics are Stats

Once you pickup new guns or gear that can be equipped you’ll see an exclamation point (!) over those respective categories in the Overview menu. It’s not a statement of a better gun or gear just that you picked up new stuff and you should take a look. To do that you want to select a Weapon or Gear in the Overview menu like the primary weapon or body armor.

Menus will show you the options you have to equip for that category with the stats and bonuses as well as comparisons to the equipped item with up or down arrows to indicated what Stats get bumped or lowered. Every item gives you different amounts of Firearms, Stamina, and Electronics Stats so you’ll need to equip different gear to suit the needs of your play style/build. All your Gear provides a certain amount of Armor as well that is used to protect your Agent. Lastly, Stats will unlock special Weapon Talents that give your guns additional bonuses as you get better Weapons.

Besides the Overview menu there is also the Character, Pouches, and Appearance menus under the Inventory. Character and Pouches were locked in the Beta but Appearance controlled the cosmetic style of your Agent. You could swap jackets and hats to look different in game cosmetically but it does not actually provide any type of advantage.

Missions, Side Quests, and Encounters

The game has three different paths to progress the plot in the normal player versus everyone zones that you start the game in. Missions are the main plot points of the game that are big instanced events. Madison Field Hospital and Subway Morgue were the two Missions in the Beta. Before starting a Mission it requires you to pick a difficulty.

Normal is the default difficulty that generally allows you to solo with success. Hard difficulty requires a group of agents to tackle but if you need some team mates their is built in functionality to find a group  as well. Entering a Mission creates a unique instance to your world that only you and your group are playing in so you can easily replay Missions on different difficulty to grind experience and get better loot.

Side Quests have plots hooks into Missions but are optional. Encounters involve the street and adjacent buildings usually where you help out a person by taking down a gang, finding a key, and unlocking a door for an innocent civilian. You can replay Side Quests as well. If you restart your game or join a new group all your Side Quests should be reset on the map so you can them again.

Firearms, Stamina, and Electronics each have different skills to level up known as Medical, Tech, and Security. As you progress through the main Missions you start upgrading the Base of Operation and thus giving you better skills. You start off with one skill slot that lets you assign a single skill and then you’ll be able to unlock more slots.

Medical skills provide healing with First Aid and heads up world scanning with Pulse. Tech skills give you extra offensive power with Turrets and Sticky bombs. Lastly Security skills give defensive with a Ballistic Shield and different Cover abilities.