StarCraft II beta players have the option to try out a new team-based mode named after the infamous Protoss unit: Archon mode. StarCraft II: Legacy of the Void officially launches November 10th but the beta is in full swing. In Archon mode two players share a base and have the ability to build and control units along with everything else one would do in the normal multiplayer. Generally, one player builds the economy (macro) while the other attacks and positions offensive units (micro). Team coordination is a must else you might forget an important tech upgrade or start stepping on your partners toes. 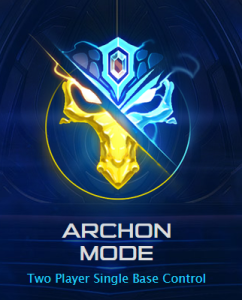 Shared bases is nothing new in the StarCraft world though. In 1998 Blizzard released a similar feature in StarCraft: Brood War called Team Melee. The big difference between the two is Archon mode only allows the team to pick one race versus the old Team Melee that allowed mixed race teams. Other than that it’s basically the same idea of starting off with a single base and sharing everything including resources, food and of course the buildings and units.

Besides Archon mode, Legacy of the Void also brings another new mode called Allied Commanders which is described as “Objective Based Co-Op” and of course new units for the multiplayer game like it’s previous expansions StarCraft II: Heart of the Swarm. The new expansion is Protoss specific since the other two races had their own expansions/base games devoted to them.

New multiplayer units for Protoss are Adept & Disruptor, for Terran Cyclone & Liberator, and for Zerg Ravager & Lurker! That’s right the classic StarCraft: Brood War unit that burrows and splashes spikes on ground units is going to be back.