Watch US Open Tennis on WatchESPN without commercials

The US Open Tennis Championships is an exciting time if you’re a tennis fan like myself. It’s been a week since it started and there has already has been so much upset and and close matches you don’t want to miss a single second of it. Using WatchESPN you can pick between multiple matches to watch along with some other special Internet only feeds that don’t cut to commercial like the regular ESPN coverage does. 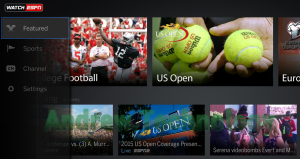 First off you need to have the WatchESPN app downloaded and activated; it’s a simple process that I outlined the steps to in my last post. In prior years the US Open had it’s own free steaming through their website but not anymore. Now, the website only uses ESPN and you’ve got to login through your service provider.

If you are familiar with the WatchESPN app here is the simple run-down: To watch without commercials always select the match that has the players name’s only and ESPN 3 logo! The ESPN feed that has commercials uses a generic name like “Primetime at the US Open” and will have the ESPN/ESPN 2 logo.

If you are new to the WatchESPN app then open up the app on your device. I’ve been using my Fire TV to watch so all my screenshots will be coming from there but it should look similar across the platforms. To the left is the main menu with buttons: Featured, Sports, Channel, and Settings. Featured is open by default so if you see the US Open icon you can navigate to it straight away and select it. By far this is the fastest way to view US Open matches but you could also go to Sports then Tennis or Channel and find coverage on ESPN / ESPN 2 / ESPN 3.

If you use Featured > US Open a square pops up with the label Tennis at the top and all the matches bellow it. If go through Sports > Tennis it load the matches to the right side. Either way you are in the right spot, now which steam should you select? 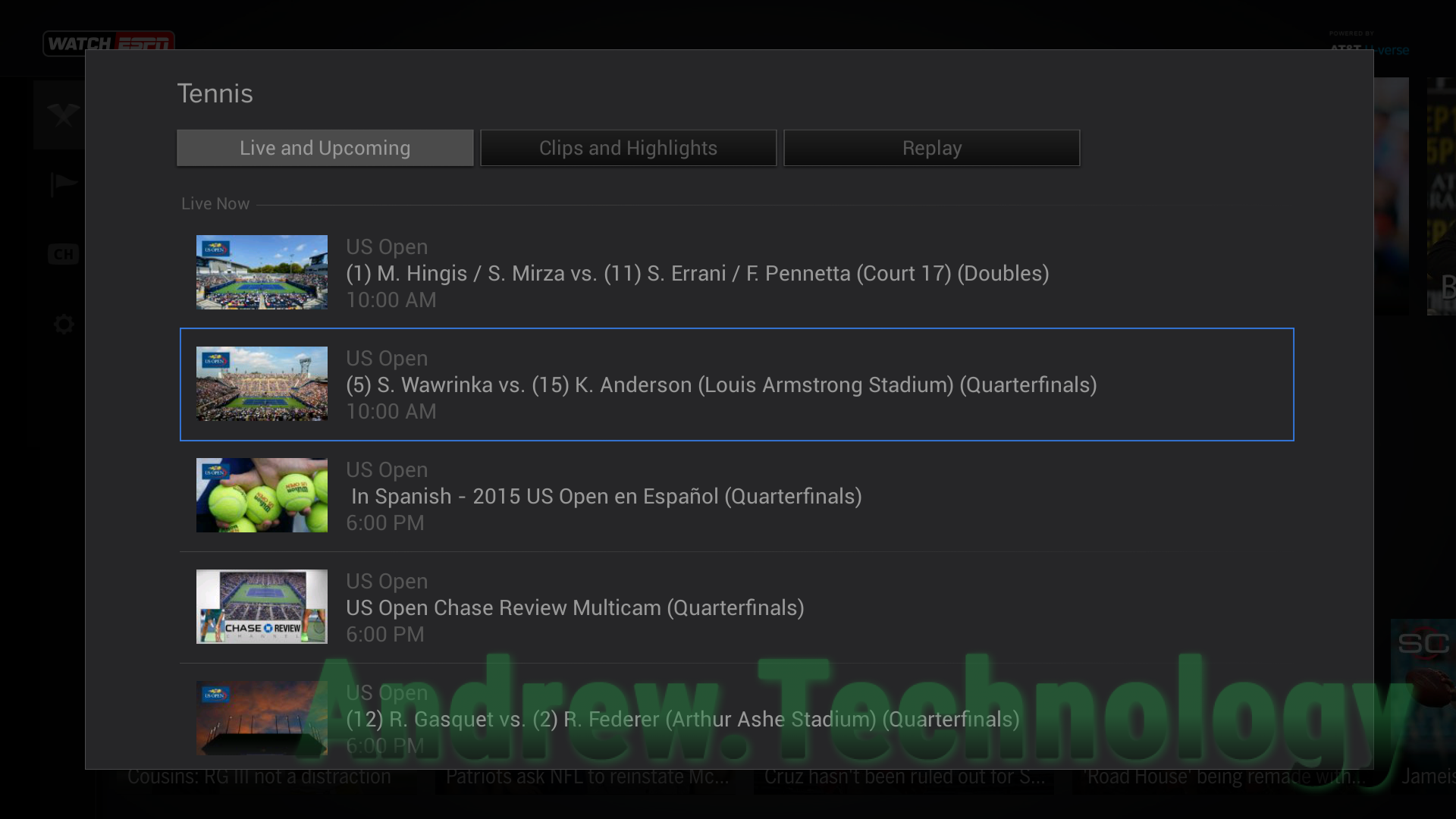 You’ll notice most matches say the name of the athletes playing. In my screenshot I see “(5) S. Wawrink vs. (15) K. Anderson (Louis Armstrong Stadium) (Quarterfinals)”. Also the “US Open Chase Review Multicam (Quarterfinals)” and later matches. At the very bottom of the list is “Primetime at The US Open (Men’s Quarterfinals)”.

To watch without commercials always select the match that has the players name’s only! The ESPN feed with commercials uses the generic Primetime at The US Open name.

Using the Sports > Tennis makes it even easier because it shows the logo of the station it’s on. All the player matches have ESPN3 logos while the generic name has the ESPN2. Or use Channel > ESPN 3 to only see the individual match feeds (this option will show you non-tennis games as well). 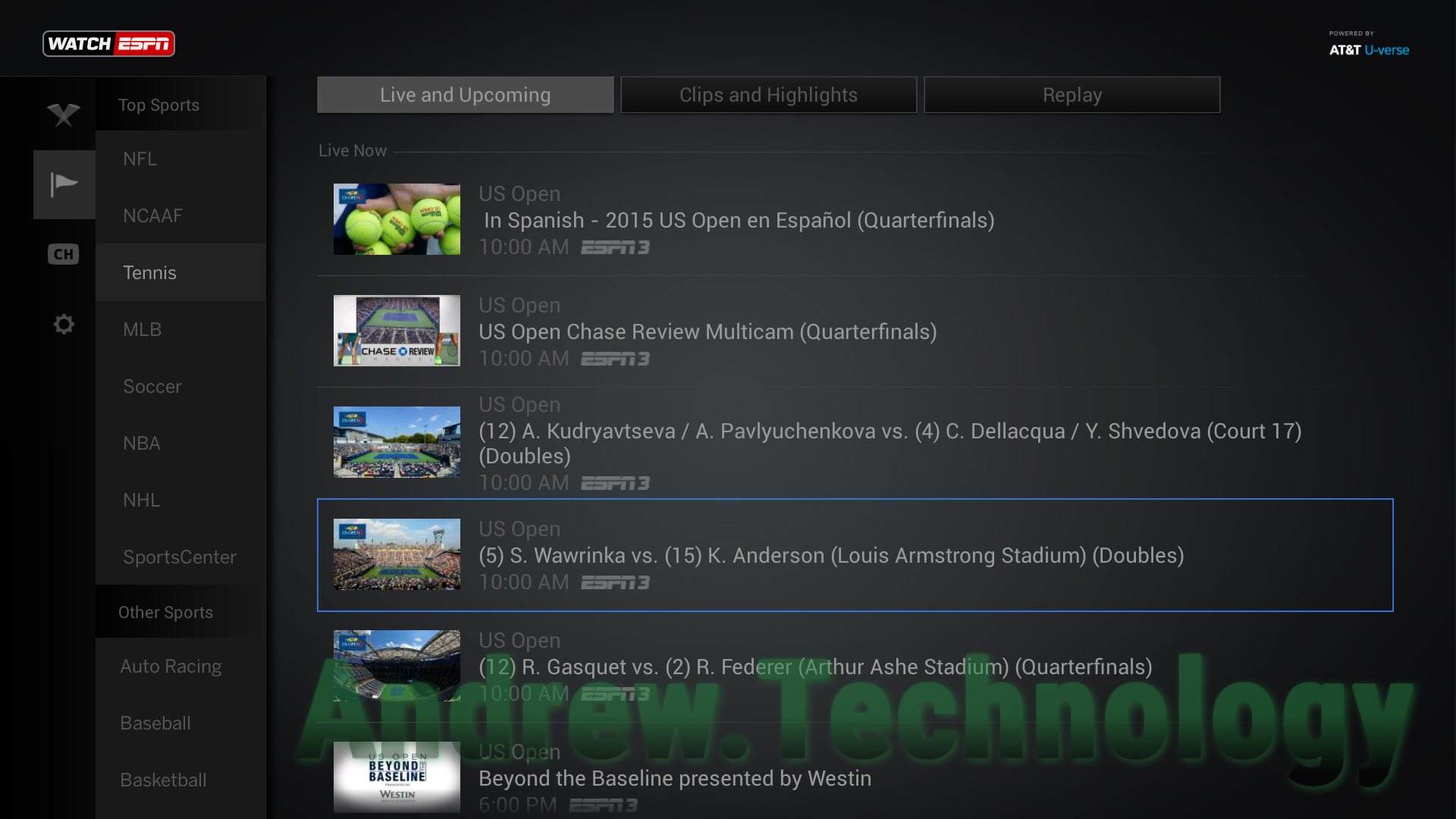 ESPN 3 match feeds show everything including the players sitting down munching on bananas to crowd shots and distance New York skylines. You really get to see more of the process of tennis on these continuous feeds. Occasionally you’ll hear some sound checks or off the cuff banter between broadcasters but that just adds to the charm in my opinion.

If you want to watch multiple matches at once you can use the “US Open Chase Review Multicam” steam. At times it will just show one match but with multiple views like on both players and the normal court (so 3 different video boxes) but in earlier rounds it would show multiple matches and go between them.