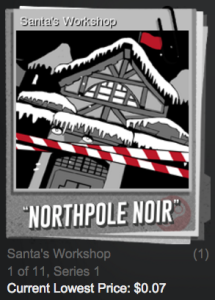 Valve’s annual Steam Winter Sale 2015 dubbed “North Pole Noir” ended January 4th after running for two weeks. Thousands of video games and DLC went on sale for the Winter Solstice holiday which started December 22nd. Unique trading cards were distributed though purchases and the new Discovery Queue with a comic book theme throughout. Each day Valve released a new page of the “North Pole Noir” comic which can still be viewed on it’s website.

All 10,114 games on sale were at their lowest price through the entire two week duration following Valve’s new sale format introduced during the Summer Sale 2015 . No more voting for community choice games and no more flash sales this year and possibly never again. Instead users had to view (or skip through) their Discovery Queue up to three time a day to get Winter Sale cards for free, unlike past years that relied on voting for the free cards.

It’s obvious Valve is trying to get new games in front of users eyes using this new Discovery Queue system. Discovery Queue algorithms pick out 12 games from the 10,000+ on sale for a user to mark as Follow, Not Interested, Add to your wishlist or Next in Queue to skip. Going through all dozen picks adds a random “North Pole Noir” card to the users inventory which is used to craft the Winter Sale 2015 badge once all 11 were obtained.

Of course users could sell or buy these cards using the Community Market if they lacked one or had duplicates. Personally, I received many duplicates by the end of the sale. I received five “Redemption” (#11) cards, four “Twinkle” (#4) and “Guess Who’s Coming to Town” (#10) cards, three “You Better Watch Out” (#3) cards, two “The Black Ice Boys” (#5) and a single card for “Santa’s Workshop” (#1), “Zippy’s Demise” (#2), “Holly” (#3), and “Sending a Message” (#6). I received no “You Better Not Cry” (#9) so I used the proceeds from selling duplicates to buy it. Most cards were selling for six to eight cents.