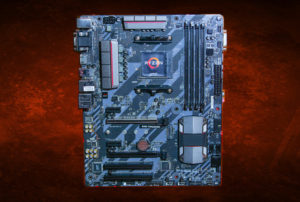 Ryzen 7 1800X, 1700X, and 1700 processors were released March 2nd. These are the latest high-performance processors released by AMD based on the Zen microarchitecture. Hardware manufacturers also launched new motherboards equipped with AM4 sockets and new chipsets to take advantage of features like native DDR4 memory, USB 3.1 Gen 2 and NVMe.

This is the first major microarchitecture launch for AMD since Bulldozer in 2011. That family of processors also included Piledriver, Steamroller, and most recently Excavator generations. Although APUs were strengthened considerably in Excavator none of AMD’s CPUs could compete when it came to intense single-core performance that enthusiasts and gamers required. This resulted in Intel’s dominance in the high-performance processor space for the last six years.

Thie release of Ryzen 7 CPUs is AMD’s answer to Intel’s i7 lineup. A defining feature of Ryzen 7 processors is they all sport 8-cores and 16 threads. This is huge because a majority of Intel chips are stuck on quad-core with a few octa-core that are expensive. Essentially, AMD is bringing 8-core processors to the masses at a price most can afford. Ryzen 5 chips were also announced to be released Q2 of this year.

It’s obvious the strategy for AMD is more cores but that was not very successful for Bulldozer and Excavator CPUs so what’s changed in Zen and Ryzen? The Zen microarchitecture dramatically increased it’s instructions per clock or IPC. This measures how many instructions per hertz can be computed by a processor. Originally, AMD was aiming for a 40% increase from Excavator to Zen but at AMD Ryzen Tech Day it was announced that Zen was actually performing 52% better than Excavator in benchmarks.

Benchmarks should always be taken with a grain of salt but when it comes to rendering and multi-core applications the Zen microarchitecture performs very well. The AMD Ryzen 7 1800X actually captured the world record for the Cinebench – R15 benchmark the day it launched. The AMD Ryzen 7 1800X beat out an Intel Core i7 5960X that’s clocked 680 MHz higher and costs $570 more!

Gaming benchmarks show a different story though. Video games especially depend on single-core performance because so few games really make use of every core in a processor. While AMD did make great improvements in IPC it’s still beaten out by Intel in this category and this shows in benchmarks for games. Another factor is Ryzen, AM4, and the motherboard chipsets are all brand new and could use optimization in both hardware and software.

All these chips come unlocked to allow for overclocking through the BIOS or AMD’s software. New “Wraith Coolers” were also released that provide cooling specifically designed for Ryzen chips.

Overall the AMD Ryzen 7 processors provide a good price-performance ratio. At the time of writing this you could buy a 1700 for $329.99, 1700X for $399.99 and the Ryzen 7 1800X for $499.99 though it’s back ordered on both Newegg and Amazon. This is just the start for CPUs released with Zen microarchitecture. Ryzen 5 processors are due out Q2 and there will also be APUs and server chips down the line.

Here are the specifications for Ryzen 7 & Ryzen 5 processors: