The team behind Cities: Skylines and upcoming expansion answered questions posed by the Reddit community on /r/IAmA/ yesterday. Topics ranged from in-game agent limits to the infamous death waves to the new expansion After Dark. The post “We are the team behind Cities: Skylines, getting ready to release our first expansion, Ask us Anything!” is still going with Colossal Order and Paradox Interactive members still answering questions a few hours ago from the time of writing this.

At close to 4,200 positive karma this makes it one of the most popular Ask me Anything (AmA) in the hot section of /r/IAmA/ at the moment. Developers Colossal Order have been very involved in the community and this is just another sign of their dedication to listening and answering the community’s questions. There is tons of great information in this post so I encourage you to read but I’ve also included some items I found interesting. I divided the comments and questions between general and Cities Skylines only and the new expansions After Dark.

Comment: How do you think/estimate piracy will affect your sales in the first few days? On release Cities: Skylines was one of the most downloaded games on public and private trackers. – tatefin

Answer: Pirates are fans like anyone else, they just haven’t been convinced to pay for our product yet. Lots of the people tweeting about us, posting on reddit or sharing our stuff on Facebook don’t legitimately own the game – that doesn’t mean they can’t contribute to the community or sales in a positive way.

The lost sales we’ll see at launch are mostly going to be because we haven’t presented a good enough value proposition to these people (bar some that just can’t afford it or be bothered).

So hopefully most piracy at launch will eventually be transferred into real purchases once these people feel convinced they want the game enough.
– TotalyMoo

Question: What mods were you the most surprised by? What are your favorites? – pguyton

Answer: First person multiplayer mod. I’m like – who even wants this?

The game does look like a hulk simulator though – with all the jumping around.

Question: How was the experience of development in Linux? – montsegur87

Answer: To be honest it’s tough. But we at Colossal want to support all three platforms (Win, Mac, Linux) and will power through it. – co_martsu

Question: Are there any plans to natively support mixing default and European building styles on the same map? I love the wall-to-wall building designs, but I would like to isolate them to certain districts. – Yocto_Koppel

Answer: That’s actually added in After Dark, a new feature called “district styles” where you can choose what type of buildings you want in a specific district. – TotalyMoo

Answer: That’s a very nice idea! Currently the streetlights just are always on at night, and they don’t consume energy or need connection to the power lines. Thanks for the suggestion! – KaroliinaK

you use look very similar to those of Traffic++

. Are they in any way affilated with the ones from Traffic++?

2a: Is it possible to turn off street lights for one specific street, road type, or all roads?

2b: In some countries the street lights on highways will be turned off after midnight (between 0:00 and 6:00). Will that be possible to do in After Dark (would look very nice and realistic)?

3: Do street lights cost you money at night?

4: After seeing the After Dark Trailer, my Dutch heart almost got a heart attack when I saw this (NSFD)

. Why the hell are those cyclists on the SIDEWALK? No sane Dutch person would ever cycle on the sidewalk when there’s an asphalted road next to it (except to take a shortcut). Cycling on the sidewalk here could cost you a fine of €45 (which is more than 3 times the price of After Dark)!

5: Will it be possible to create just a bike path

? No bicycle-friendly city would be complete without those red bicycle lanes.

6: Do we get something like London’s Boris Bikes (Bike docking stations, as a type of public transport) in the game?

7: What will parking cars do on road with a bicycle lane? will they disappear or will they try to park elsewhere?

Oh, and keep up the good work!

So many questions! I’ll try my best to answer! 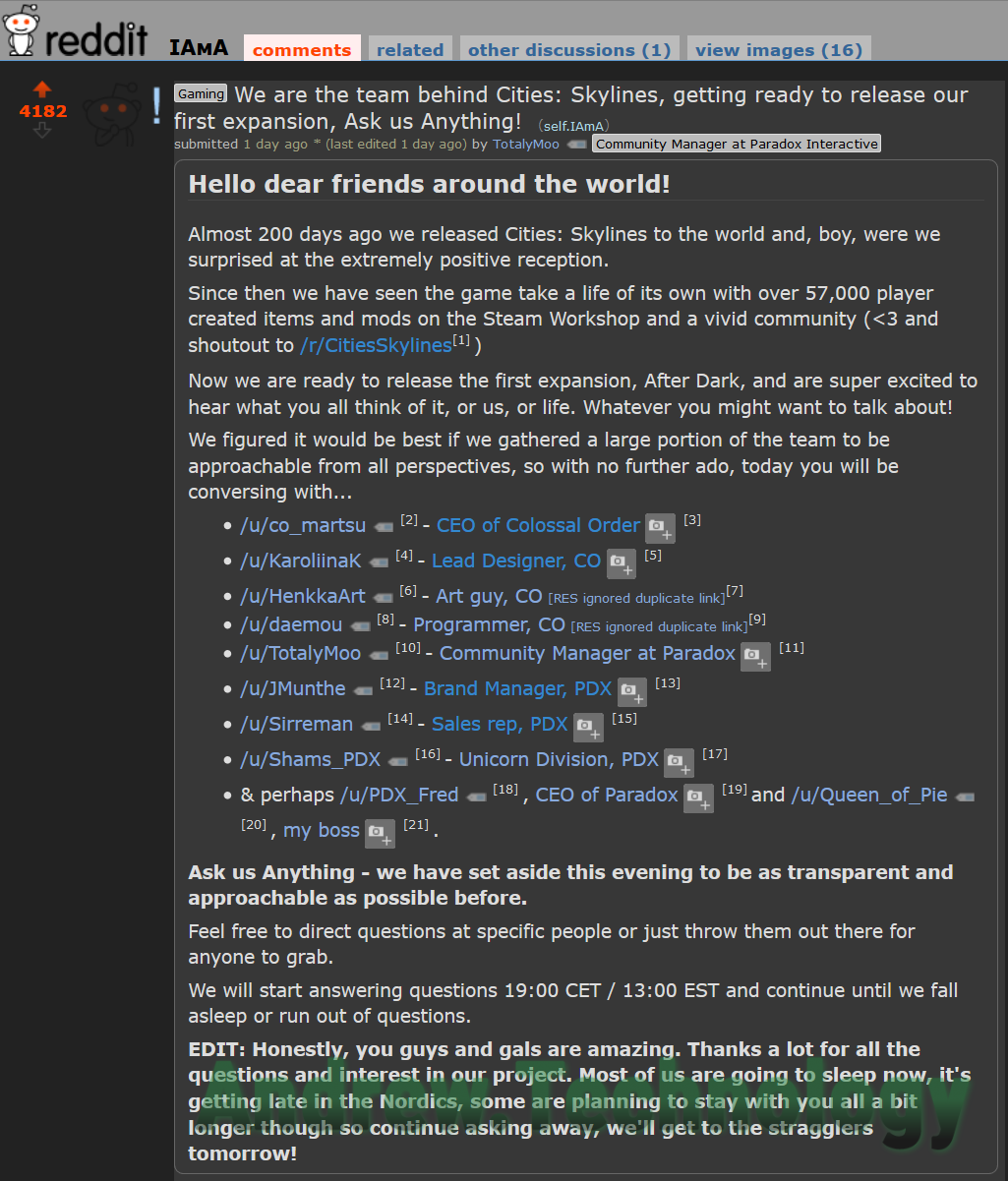