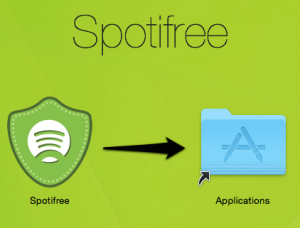 If you listen to Spotify Free on Mac OS X then you can easily run Spotifree to mute audio ads automatically. Spotifree is a tiny program designed to run at startup and live in the top menu bar as an icon with a dropdown menu. Every half second it asks Spotify for the URL of the current track, which is available as an API and determines if it’s a song or ad and mutes accordingly. This is a non-intrusive method so nothing is being hacked or changed on Spotify’s end just simply reading data and muting/unmuting based on it.

Head over to the developer’s website to download the DMG bundle for Mac. Install through the usually OS X method of mounting the DMG and then drag the Spotifree icon into the Applications folder. Running Spotifree for the first time it will ask: “Do you want to run automatically on login?” which you should click OK to especially if you are running Spotify on startup as well.

That’s it for the install, time to fire up Spotify and start listening to test it out. The Spotifree icon should be in the top menu bar near the Bluetooth, WiFi, Power icons in the top right of the Mac user interface. When you are listening to a song the icon will appear normal but the second an audio ad is playing the icon will have an X going through it to state it’s muting. If you clicked the icon a drop down gives you more information including the state of either “Spotify is playing” or “Muting an ad” and options to update, change settings or quit the program.

Mac OS X Spotifree: Do you want to run autmotically on login?

I wrote about EZBlocker which does something similar on Window only a lot better since it’s able to block audio ads altogether sometimes and visual banner ads. Like EZBlocker though, this project is also on GitHub and licensed under the MIT License making it open-source software. This is a great thing because anyone can review the code or offer updates in the future!

Spotifree cannot block video ads or mute them automatically right now. Also banner ads and graphic pop ups will not be blocked under this program. I tested over a period of time but at the time of writing this my Spotify was version 1.0.15.133.gf21970bd and I’m running Mac OS X 10.10.3 Yosemite.