This download was taking too long and was stopped by the network.

While trying to download the disk image (ISO) for Windows 10 from the official Microsoft servers (http://software-download.microsoft.com/) I kept getting an error in Chrome: “This download was taking too long and was stopped by the network.” The image should be around 4 gigabytes but Chrome would only download around 2.15 GB before erroring  out and resuming was not an option! 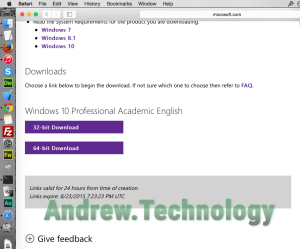 Honestly, I assumed Microsoft’s servers might be on the fritz because I had not been experiencing any issues with my internet or Chrome and I had never seen that particular error message before. I tried to download it again but with the same results. Time to try another browser and I happen to have Safari open because I was on my MacBook Pro. It downloaded without issue in Safari and I resumed my Windows installing adventure onto my computer.

It turns out this was not just a Microsoft thing but Chrome has issues downloading files larger than 2 GB apparently! The most active issue concerning the topic hosted on Chromium’s code.google.com page I found was: “Issue 89567: HTTP Download stops at 2GB when saving the file on another NTFS drive.” This thread was started in 2011 and had a comment as recent as Aug 11, 2015 from the time I wrote this.

Interesting bits in the thread included:

I’m on Ubuntu 11.04. It goes to 2GB and stops with the Windows 8 CP ISO. I’ve tried it at least 10 times, and if it starts at all, it will only go to 2Gb and claim to be done. The file is 2.52GB. It wont download on my Vista machine at all using IE9. I’m using Chrome on Ubuntu, and have tried Firefox and Chromium, which don’t work at all.
#7 desighne…@gmail.com

I also encountered this problem while trying to download a file > 2GB from Amazon cloudfront servers. I open a new tab, paste the link in the address bar, and hit Enter.
Twice the download has been incomplete, different sizes each time. One time was 1916208128 bytes (already deleted the other file). Full file is 2123802785 bytes. One time Chrome did get the whole file — strange to be so inconsistent.
#57 percy.bl…@gmail.com

Even though I was on OS X and not using NTFS as the format of my storage it sounds like others have been having the issue. Throughout the issue thread various Chromium.org  members chime in asking for logs and links to files that have this download issue to test but there is also a strange impression this issue will not be fixed. The thread was almost shut down being marked “Closing old bug as obsolete” without providing a fix. Ending sentiments from the thread:

Well, given how long the problem has been outstanding, and given that the precise limit of truncation shows that this can’t be dismissed as a rare or random glitch, it is perfectly clear that they neither care nor can be bothered to do anything about it.
#99 T.A.H…@gmail.com

I should also point out that Google Code is being shut down as noted by the red letters atop the screen: “Google Code will be turning read-only on August 25th. See this post for more information.” Eventually, everything will be taken down on Google Code, so who knows if this bug will ever get fixed.