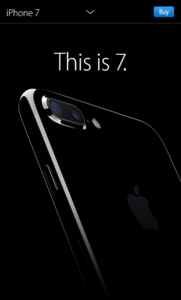 Apple released it’s new phones but unlike past versions the iPhone 7 is designed without the headphone jack. The decision to drop the 3.5 mm headphone jack is part of Cupertino’s overall design aesthetic of making devices smaller at the expense of hardware ports. Apple’s Lightning EarPods are included along with an adapter for 3.5 mm jack.

For the curious, you can use the EarPods on devices with a Lightning port after they’ve been updated to iOS 10, though I’m not sure why you’d want to. Using wired audio through the Lightning connector means you cannot be charging or connecting to a computer because it can’t do any of those simultaneously! It’s a stunning omission but by default the new iPhone 7 cannot charge and be connected to EarPods or any wired headphones at the same time.

Rumors about the change to the audio port surfaced well before Apple’s official announcement on September 7 in San Francisco. Earlier in the year a redesigned MacBook was released which consolidated almost all of the ports into single USB Type-C port but the 3.5 mm headphone jack survived. Could Apple really keep a headphone jack in a redesigned MacBook but not the new iPhone?

Instead, Apple is pushing it’s propitiatory Lightning port for wired audio consumption. It released it’s own EarPods with Lightning Connector that retail for $29.00 and got some audio manufacturers on board early to have new Lightning specific devices ready for the iPhone 7. For a cool $199.95 you can pickup the JBL Reflect Aware that are advertised as a “Lightning connector sport earphone” featuring Noise Cancellation and Adaptive Noise Control.

Here’s a list of what’s included with the purchase of an iPhone 7 or Plus:

All this might have left you scratching your head. Why would Apple make the decision to drop the standardized 3.5 mm headphone jack? Besides Apple’s design aesthetic an answer also came from Phil Schiller, Apple VP, is quoted as saying “the reason to move on [is] courage.” So there you go, Apple removed one of the most ubiquitous audio connections ever on the basis of “courage.”